Growing up my family played board games often, so I’ve played a variety of games since I was very young and have a few that are still memorable favorites. One of these is Scrutineyes – if I could convince my mother and brother to play with me.

Scrutineyes was designed by Brian Hersch and Mike Wilkes and published in 1992 by Hersch and Company, Mattel.

It’s a party game, not requiring much of anything except a lot of knowledge! Arguably it is a memory game – except I got into trouble for memorizing and it reached a point where no one would play with me anymore because I could remember too much! It can be played with a 2-8 people and has a play time of about 30 minutes with very little setup, which makes it great for a group night.

The game itself is also very simple to explain and learn, in a matter of minutes even those who have never played before can be playing. Each player is given a picture, you can choose to play the cartoon side or the realistic side. 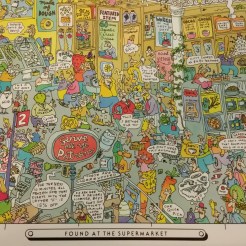 Once players have decided which side to use, and everyone has an image, a dice is rolled that will tell the players which side of the picture to cover. Only half the image is used at a time during game play – this makes it a little easier as your focus is only on half the image!

Players than cover half of their image and everyone is given a one minute (thank you handy sand timer) to write down AS MANY words as they can! For the cartoon side its themes. Such as “found in a supermarket”, so you look at the image and write down as many of those as you can see on the image. For the realistic side, it’s a letter, for example – things starting with the letter R.

Below is a list of words – one point for every unique word: 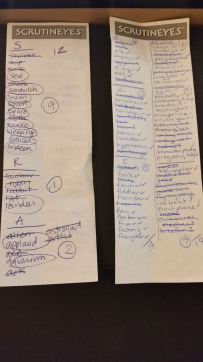 Once the timer is up, the players rotate the images, and do it all again. This continues until every player has had each image once. They will now all have a very long, or short, list of words for each image. Players then go through and read their list for each image – if another player has the same word listed, then they must cross it off. You are awarded one point for every word you have that no one else has. (You must also be able to point it out in the image if no one believes you that it’s there!)

Check out a few more pictures from our game play:

Scrutineyes was one of my favorite games growing up. I loved the artwork; I also loved the learning aspect of the game. Scrutineyes was never intended to be a learning game in fact the game is for ages 18+. Not because there is anything graphic but because of the challenging nature of the game. As children my brother and I never played the cartoon side with my mom and I distinctly recall that was because it was far too hard for us. One of the cartoon sides has you searching for song titles – and you will see things like a guy on walking on a set of stairs heading to heaven: aka “Stairway to Heaven”, the cartoon side is far more challenging and required an understanding of concepts and themes that as a ten year old  I couldn’t do.

The realistic side however was suitable for us. While still a challenge we learned from it, in fact we learned a lot! My mother never held back when playing games with us, and because the rule was you needed to know where to find the thing you named on the picture, I learned not only new words but I learned what those words were associated with. While I would start with simple things – listing buckets, brooms, benches. Soon I added to it, with things like beagles, bullfrogs, etc. My vocabulary grew! It was a great way to learn new things.

As mentioned I called it a “memory game” – this is probably the downside to the game, not only was I learning words, I was memorizing them. Soon I reached a point where I could recall every word my mother wrote down before in previous games, write them down really quickly before the timer was up, and still have time to search for new words. Which meant it made it much harder for my mom – and I was accused of cheating!

And… maybe as a kid I’d also take the pictures and just study them, because I liked them so much! Even now, I still enjoy the game and artwork very much.

*Note this game is now out of print – if you’re interested in it, Amazon has it for some pretty hefty prices… eBay has some good deals though!