“Everyone else knows more than you. They belong here. You don’t.”

The voice in my head nags daily as I go through life. Sometimes it’s quiet; other days it’s screaming in my ear. It’s always there though, eager to eat away at me. Each thought building up on the last growing slowly, getting louder, and louder and then it catches you. It’s grip like a fist as you sit there panicking – because what if the world around you realizes the truth?

What if they realize you’re a fraud.

The topic at hand today is a very personal topic but a very important topic.  I’m in the first semester of my PhD in Library and Information Sciences, and even after I’ve been in grad school for 3 years (I did two Master’s degrees) it doesn’t change anything. In fact if I am honest I’ve felt this even during my undergrad and starting near the end of high school. This nagging, pushing, pestering thought of “I’m a fake.” Sitting there in class, at work, at meetings, with my online group of writing buddies, and wondering – is the next thing I say going to be it? Will they realize I’m a fake? Will they figure me out, that I don’t belong here?

This feeling as a name; it’s called Impostor Syndrome. Maybe it’s a term you are familiar with but maybe not. Personally I had not learned of the term until half way through my second semester of my first master’s degree, when someone pointed out to me that they had felt the same way when they started their degree. They also pointed out it was common and something many people struggled with. So if so many people struggle with it, why is it barely talked about?

Well, for starters, no one wants to admit they think they are a fraud. It goes right up on the shelf along side depression and other mental health issues no one wants to touch. It’s tough to admit; it’s harder yet when everyone around you seems just fine. Everyone else seems like they know what they are talking about or that they are on top of everything and so why would you ever think to stick your neck out there and say, “I feel like I don’t belong”. You’re just swimming along with everyone else hoping no one notices you can’t swim. The very core of Impostor Syndrome is an overwhelming belief that you’re less then those around you and so if you’re the problem – why would you point it out to anyone else?

“Impostor Syndrome is a term referring to high-achieving individuals marked by an inability to internalize their accomplishments and a persistent fear of being exposed as “fraud”. Despite external evidence of their competence, those exhibiting the syndrome remain convinced that they are frauds and do not deserve the success they have achieved. Proof of success is dismissed as luck, timing, or as a result of deceiving others into thinking they are more intelligent and competent than they believe themselves to be.”
(https://en.wikipedia.org/wiki/Impostor_syndrome)

That is to say, no matter how many achievements you have you’re still going to just write those off as luck, and nothing that you did. You fail to recognize your own achievements and as a result you continue to feel that anxiety that you are a fraud. I can’t stress enough how common this is among high achieving individuals. Not just students, the assistant dean of my faulty even admitted to feeling it too.  We’re in this mindset that everyone else around us is competent and know so much more than us. When in reality, we all know something and we all have strengths we can bring – if we don’t silence ourselves with our fear and anxiety. 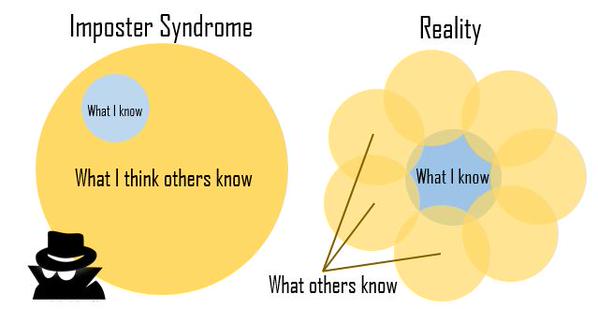 In regards to the definition you might be pushing back against it already; saying “I’m not a high-achieving individual… so that can’t be me – I’m probably just really a fraud.” That’s the very root of imposter syndrome! Don’t ignore it.

And it needs to be talked about. Especially in academia, at any level. The fact that I went through 6 years of undergrad and nearly a year of my first master’s struggling with it – I know I am not alone. It’s hard enough as it is to bring it up, it’s even harder if you’ve never even heard of it and don’t realize how common it can be. Sources online will tell you that it’s mostly common in females but I have male friends who have felt the same way. It can effect anyone.

I know that our course outlines and school handbooks point out that there is a mental health center if you need help but I think there needs to be more. And that’s why I am writing this blog post. Just to simply raise awareness for the fact it’s out there and it’s not something that you’re going through alone.

So what can you do about it? First – talk about it. Mention it to other people in your work group, your classes, your writing groups. Imposter syndrome thrives on isolation and trust me, someone will say they feel the same way you do. Once you can acknowledge and find others who are in the same boat you are, it’s easier to address and talk about. Second if you can push that negative voice aside and try to focus on your achievements and remind yourself that you did do this. Third, seek help if you need too! Especially if you’re in school, where it is so common, go to the health services and find someone to talk to! It will go a long way! Fourth, there are tons of Ted Talks and blogs out there on the topic with advice, try checking those out and you mind find that someone says something that really registers with you and helps you out!