When people ask me what my favorite book was growing up, hands down I’d say the Phantom Tollbooth. In reality, it’s probably tied with Anne of Green Gables. Those were my early loves, following those my favorites would become anything by Tamora Pierce and L.A. Meyer’s Bloody Jack series.

Usually though, I like to talk of the Phantom Tollbooth. I’ve even gone as far as mailing a few copies to people just to encourage them to read it! So, without further ado, let me introduce you to:

Back cover: For Milo, everything’s a bore. When a tollbooth mysteriously appears in his room, he drives through only because he’s got nothing better to do. But on the other side, things seem different. Milo visits the Island of Conclusions (you get there by jumping), learns about time from a ticking watchdog named Tock, and even embarks on a quest to rescue Rhyme and Reason! Somewhere along the way, Milo realizes something astonishing. Life is far from dull. In fact, it’s exciting beyond his wildest dreams. . .

Let me start by saying, it shaped the way I see the word and inspired my creativity to grow. My mother, brother and I were constantly quoting it to each other. Saying “Oh don’t jump to conclusions you’ll have to swim back” because we all knew that conclusions was an island and the only way to leave it was to swim. 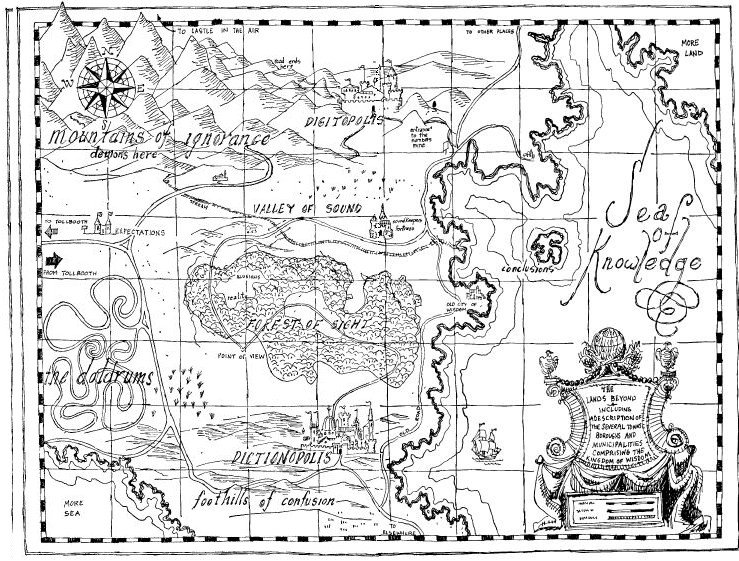 It’s full of wonderful wordplay, and it certainly views the world with such pleasing creativity. It has little illustrations every few pages that attempt to capture the oddity of the world that Milo has found himself in. As a child, the book is suspenseful and near the end a little frightening (at least it was for little me!) as Milo meets some horrible creatures before finding the princesses Rhyme and Reason.

My favorite place in the book then and still to this day, was the Dictionopolis. I’ve loved words since I was little and I loved Dictionopolis because of how words were described. In Dictionopolis you can literally eat your words and some words are sweet while others are not.

“Oh dear, all those words again,” thought Milo as he climbed into the wagon with Tock and the cabinet members. “How are you going to make it move? It doesn’t have a—”

“Be very quiet,” advised the duke, “for it goes without saying.” And, sure enough, as soon as they were all quite still, it began to move through the streets, and in a very short time they arrived at the royal palace.

This book brought me a great deal of pleasure as a child, and then again as an adult – it’s one of my comfort go-to novels. What I didn’t understand as a child, was so much fun to discover as an adult. It’s a well-loved book, when first published it received rave reviews, sold in excess past it’s expectations, and it has been adapted into a film, opera, play and translated into many languages.  The major theme of the book is the importance of learning to love learning. Perhaps it’s the reason I’ve gone on to do so many degrees and love learning! Maybe it has shaped me more than I realized. A book I’d recommend to anyone, it’s a little cheesy and certainly written for a young audience but I loved it (and still do)!