A couple of months ago I was at a gaming store browsing their merchandise. Typically I’m not one to purchase something like this without any prior knowledge of what it is, but I took a risk with this one – a risk that I’m very happy I took :). Originally what caught my eye was the cover of the case. I liked the look of the game. 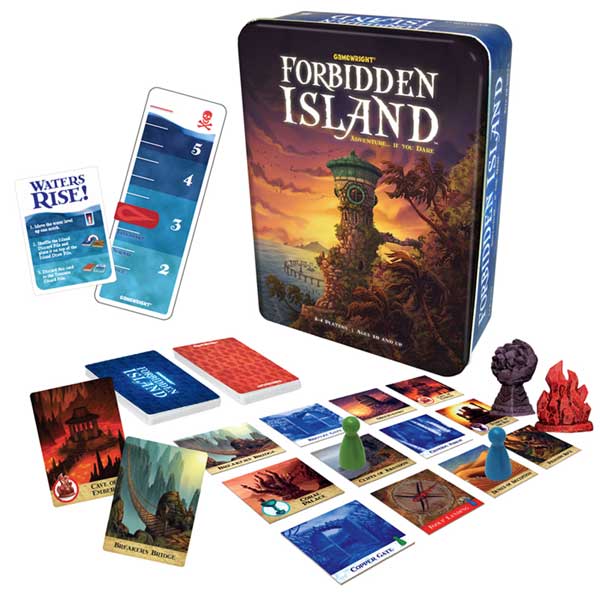 Now, I know looks can be deceiving, but the description intrigued me as well: “Dare to discover Forbidden Island! Join a team of fearless adventurers on a do-or-die mission to capture four sacred treasures from the ruins of this perilous paradise. Your team will have to work together and make some pulse-pounding maneuvers, as the island will sink beneath every step! Race to collect the treasures and make a triumphant escape before you are swallowed into the watery abyss! The latest creation by cooperative game master, Matt Leacock who created the best seller Pandemic.”

Created by Matt Leacock and published in 2010 by Gamewright Games, Forbidden Island encourages problem-solving, creative thinking, and cooperation. The game is designed for 2-4 players, ages 10 and up (younger children can play, they’ll likely just need some guidance when taking their turn). I can’t count how many times my family and I have played this game. It’s become a staple for us. My dad, who has a hard time finding any board game he likes, loves Forbidden Island. I think it’s because it’s not your typical game. Like the description says, in Forbidden Island, all of the players are working together as a team. Rather than the usual race to see who wins first, if one player loses on the island everyone loses.

The objective of the game is to work cooperatively to gather all four treasures scattered on the island and to escape before the island sinks. Easy enough, right? Except in this game, there are four ways to lose and only one way to win. With the odds stacked against you, this game thrilling and it entices you to play again and again.

From the board itself which is in tile form, making the layout different every time; the job cards which are given out at the beginning; to the addicting desire of wanting to beat the game; the replayability is commendable.

At the beginning of each game, everyone is assigned one role card, or job card, which explains your special ability during the game. There are six different role cards that you may receive and they make each player a key to the success of the mission.

While there are many moving parts so to speak in the game, it isn’t very difficult to learn. I’m more of a visual learner and instructions usually lose my attention, however, I appreciated that the instructions that came with Forbidden Island weren’t difficult to follow. Because I am a visual learner, I like watching videos like this to see how other people play the game:

For more information on gameplay and also some pictures that will give you an idea of what the game looks like you can look at this site: