Hello!  Today I’m going to talk about a book that I did another buddy read with that I did with three of my writing friends!  We had a lot of fun reading this book together and talking about it as we read along.  We decided to read Ready Player One before the movie comes out and since a lot of us are into nerd culture and references we thought it would be right up our alley! 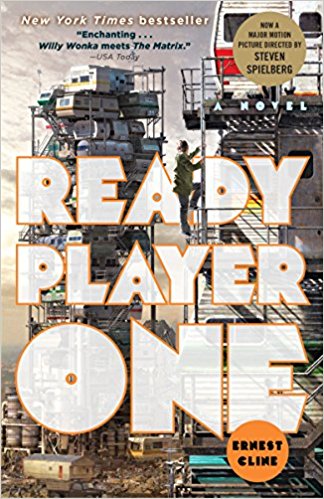 Summary from Amazon: In the year 2045, reality is an ugly place. The only time teenage Wade Watts really feels alive is when he’s jacked into the virtual utopia known as the OASIS. Wade’s devoted his life to studying the puzzles hidden within this world’s digital confines—puzzles that are based on their creator’s obsession with the pop culture of decades past and that promise massive power and fortune to whoever can unlock them. But when Wade stumbles upon the first clue, he finds himself beset by players willing to kill to take this ultimate prize. The race is on, and if Wade’s going to survive, he’ll have to win—and confront the real world he’s always been so desperate to escape.

For the most part I liked this book, even though I thought the beginning was a bit slow (I read the ebook and it wasn’t until around the 18% mark where it really picked up and I really got into it) and some parts I thought were just redundant (How many times must you explain what Player VS. Player?!  WE.  GET.  IT.  OKAY?!) and around the middle-ish I thought things got a bit weird… and a bit unnecessary, but that’s just me.  I know a lot of my friends and readers, in general, loved this book and I enjoyed it too, it’s just not one of my absolute favorites.  I’m still really glad that I finally read it especially before the movie came out!  Also, I didn’t get all the references or the clues within this book and even though I didn’t have to know all of them, I was still able to follow along and have fun since Ernest Cline does a good job explaining them.    I did, however, wonder that if I had known all of the references if I would’ve been able to work out all the clues right along with or before Wade did.  Even though this wasn’t one of my absolute favorite books it was still good and an enjoyable ride and I will totally read the sequel when that gets released!  I really enjoyed the world Cline built and would definitely like to enter it again and find out even more things about it!

The movie is coming to theaters this month!!  March 29th!!    I’m looking forward to it and interested to see what they added to it (or take out of the movie lol) or what things they changed!  Here’s one of the movie trailers for it:

What do you think?  Did you read and like the book?  Are you planning on seeing the movie (whether or not you’ve read the book beforehand)?  Let me know in the comments!  Let’s talk about Ready Player One!