This is an update on my Disney Challenge, which you can read about here. I’ve decided against writing a post on every single movie – more on the ones where I discover something interesting or have something to say.  That being said, aside from the few in this post, no posts will be written on movies without source material. 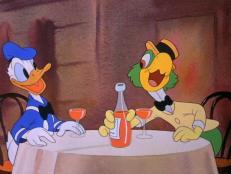 or, “Greetings, Friends” in Spanish.  There is no source material for this film – it is strictly from the minds of Disney animators and storytellers.  Only 40 minutes long, this movie isn’t a continuous narrative, but it’s a package film.  There are 4 featurettes within it.  It was originally made as a companion to a Good Neighbor tour during WWII.  Many Latin American countries had Nazi ties, and Mickey Mouse and friends were quite popular south of the border.  The U.S. hoped to counteract these ties by using Mickey Mouse and friends to charm the Latin American governments to our side.

In addition to animated featurettes, it includes documentary footage of Disney animators and employees going on a tour of Latin Maerican, including some of their artwork.

Donald Duck takes us on a tour around Lake Titicaca, Pedro the mail airplane takes us around the mountains of Chile, Goofy shows us what it’s like to be a gaucho in Argentina, and Donald Duck and José Carioca pay tribute to Brazil. 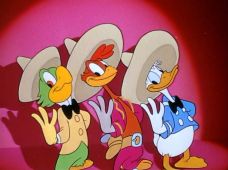 There is no source material for this film either.  This is Disney’s 2nd package feature which continued the mission of goodwill towards Latin America near the end of WWII. The movie features 6 vignettes strung together by Donald receiving presents from his Latin American friends.

José Carioca (it was a different time when you could have a cartoon character constantly smoking a cigar on screen) returns and we meet a new character, Panchito Pistoles.

Segments include Pablo, a sweet penguin who dreams of enjoying the sun and beaches of Central and South America, a story of a flying donkey, and a segment where live-action is mixed with animation. Disney fans will also recognize elements later used in Fantasia.

While it’s not a compelling tale by any means, it is a cute and clever collection of shorts.

The movie stays as faithful as it can while keeping a tight narrative. Most all of the elements and characters from the book are present even if their actions or motivations changed for the sake of the story.  The major difference is that in the movie Pinocchio is led astray by his naivete while in the book he is purposefully selfish and naughty.

There is a talking cricket in the story who tries to reason with Pinocchio before the puppet smashes him with a mallet.  In the story, the blue fairy appears more and is more of a human-type character in different incarnations who looks at Pinocchio as a brother or son.  In the book, Pinocchio actually turns fully into a donkey before he is tossed into the ocean by his owner, where he turns back into a puppet and is able to find the shark (not a whale, like in the movie) that ate Gepetto.

The book was clearly written as a cautionary tale to children with morals of being kind to others and obeying your parents.  The movie also got away with a lot more than any Disney could today.  Kids smoking cigars, drinking beer and using words like “jackass?” The MPAA wouldn’t hear of that today.