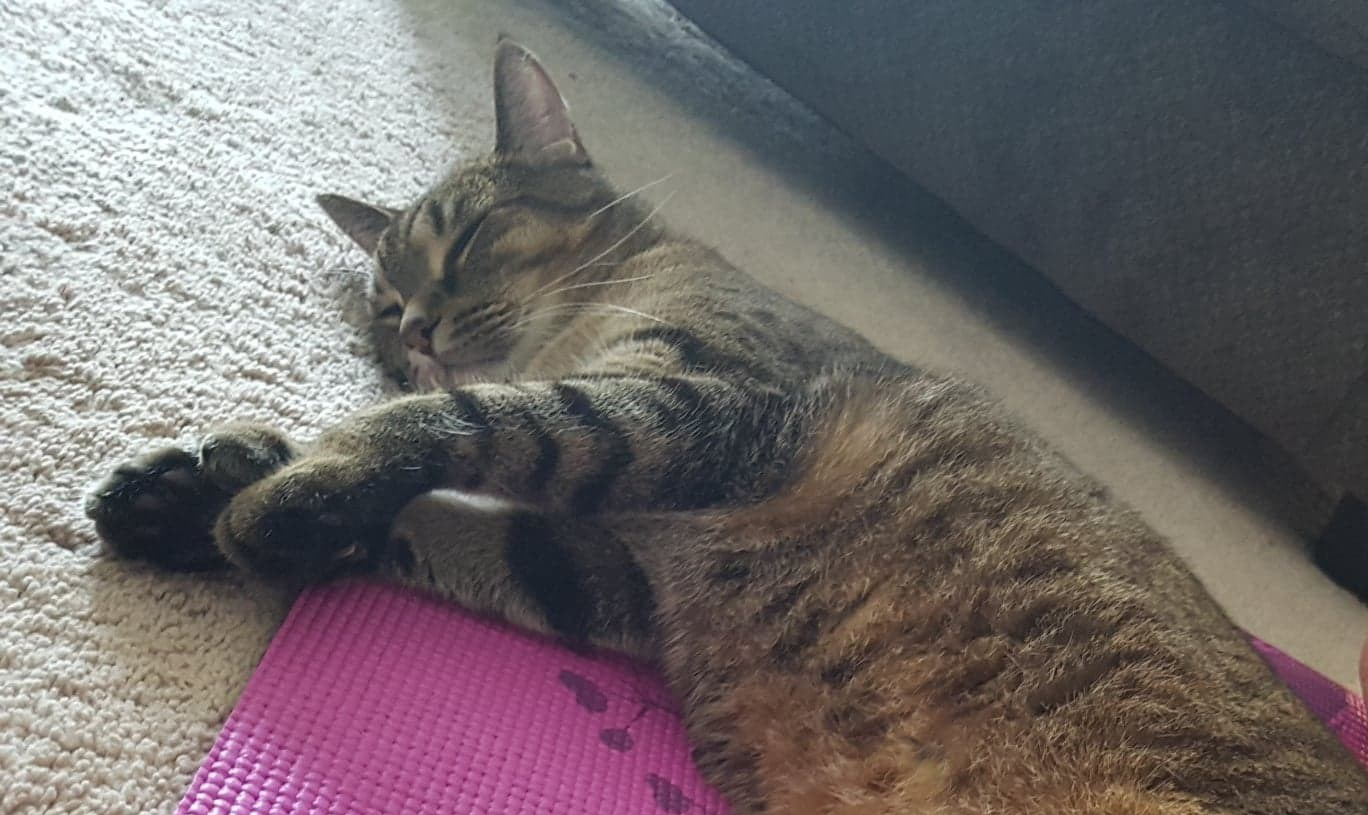 Since it’s national yoga month, I thought I’d share a little bit about my journey with yoga (which started very recently this summer). I never thought I’d be the sort of person to do yoga. Admittedly, I’ve always been curious about it and have always considered trying it, but it didn’t always seem like my cup of tea. Recently this summer though, I gave it a go. A serious go (so not counting that one time two summers ago where I tried it once).

Tara had been attempting to do daily yoga herself, and I decided to join in. It’s always a little easier to stick to something with you have a buddy to badger you about it! Tara introduced me to Yoga with Adriene, and we jumped into a few beginner videos. We decided to start with the beginner videos to warm ourselves up and to not get discouraged by jumping into something too hard too fast!

Once we ran out of beginner videos (about 1.5 to 2 weeks worth) we dove into True, a 30 day yoga journey with Adriene (intro video to the series below).

We made it through! And we started another 30-day video after that (well 31), her Revolution series. I’m hitting two months or a little more now of daily yoga. It hasn’t always been easy and this current series we’re working through is tough, making it so much harder to find the motivation to go do it and honestly without Tara doing it too, I’d probably have quit already. It’s not about motivation though, rather it is determination. I feel proud of myself and Tara for having come this far. Hopefully once school starts up we’ll keep going!

So I’m not here to push yoga on everyone, just to personally tell you what I’ve experienced with it and why it’s something I hope to keep up with! Maybe you’ll be inspired to give it a go.

Feeling better about myself: This is a big one. I’m not my skinny self anymore, in fact, recently I gained a lot more weight than I ever hoped to thanks to depression. So when I look at myself in photographs — it’s not really like I’m seeing me anymore. I wonder who is this? And I still do, but I feel that since starting yoga, I’ve been more accepting of flaws I see in myself. I do yoga in my underwear – hey it’s hot in the summer! – and I used to be in downward dog, looking at my jiggly thighs telling myself how ugly they are (not really good mental yoga there…) as we’ve continued to do yoga, I don’t know if it’s that my thighs are physically improving or if my mental attitude is, but something is changing and I’m more accepting of my thighs and myself! Whatever one… I’ll take it!

Stronger back: I have pretty bad posture thanks to a lifetime of being a student and the invention of desktops and then into laptops where I slouch like a sloth on the couch all day. It use to be really painful for me to straighten my back, or even hold my posture straight for any amount of time. Which was discouraging because no matter how hard I tried to tell myself to work on my posture it wouldn’t go anywhere as I quit when it was painful. Yoga strengthens your core and back muscles. I can stand straighter now without pain and as I continue yoga I hope to work on my posture.

Feeling more trim: This really ties into feeling better about myself and probably the better posture I am now carrying around but I feel like I’m more trim. Again it’s probably more my mentality than any physical changes just yet. I’m probably more confident, and carrying myself better though!

It’s an exercise I can do: Before depression hit, I was really active. I did aerial silks and pole dancing. I also went swing dancing weekly. All of that stopped, and as I mentioned earlier my weight jumped drastically. Since then I’ve been on the mend and really have wanted to get back into shape and  be active again but it’s been very hard. With my efforts I got Achilles tendinitis on one side, and a year after I got plantar fasciitis on the other side. This makes running, walking, standing very hard. I’ve also contended with a bad knee since I was young. Needless to say, all of that hasn’t been helping me. Going back to pole or silks was also too costly…. Bring in yoga!

You might look at yoga and think, or I need to be really flexible or strong to make that pose and hold it — but the only way you get flexible and strong is by starting somewhere. I can’t get my leg that high, or hold a pose as long as Adriene. But I’m getting better at it. Adriene is a great place to start if you’re interested in yoga. She wants to make it open and inviting to all. She explains each pose, and also encourages that you don’t force yourself into it or feel discouraged if you can’t get it. If you knees are bent or your heels aren’t touching the floor yet in downward dog — that’s okay! Keep trying and overtime you’ll eventually get there. Whether it takes a week, month, or year! She’s a very calm and encouraging presence. The motto that floats around with YWA (Yoga with Adriene) is Find What Feels Good (FWFG). You do what you can do for yourself, at your limits. As you progress those limits will grow, slowly but surely. So even when I struggle with certain moves, I know it’s okay. Yoga of course is still hard at times on my feet, but it’s gentle enough that I don’t worry about hurting myself, and if a move is particularly painful I insert another move to do until Adriene moves to the next one.

Want to give it a try?

But don’t know where to start? I’d recommend going to Yoga With Adriene (the Youtube channel) and trying some beginner videos and then when you feel ready, pick a 30-day series to work though!

Or! If you’re interested in giving yoga a try, starting in just a few days on Monday (September 10th) is a two week series that focuses on yoga for everyone! Check it out below:

To end my blog post (and another reason I enjoy yoga), I’m going to share a few pictures of my cat Jack. Jack is obsessed with my yoga mat, often claiming half of it for himself (and sometimes fighting me for it!). I love that yoga time is also Jack time. He comes and headbutts me, or curls around my arms and legs. For some reason or another he always makes me smile during yoga! 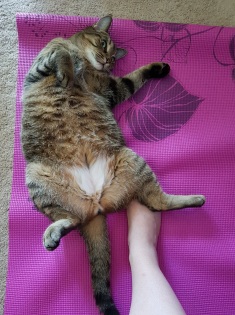 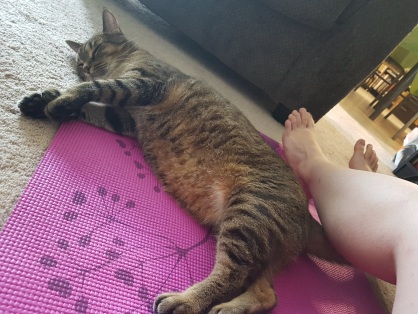 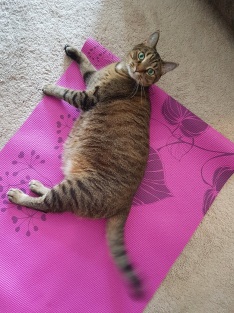 Hi everyone! . Just a quick note to let you know we'll be taking a small break to recharge & refocus! While our blog will be inactive we may still post randomly on social media but there won't be a set schedule. . We'll see you again soon! ❤️ . . . #mentalhealth #break #rest #relax #haitus #vacation #refocus #breather #takeabreak #amwriting #campnano #green #nature #rejuvanate #gooutside #takeawalk #spring
Where do I even begin? My love for Bangtan started at the end of July this past year, right before their August 2018 comeback. At my best friend's persistent urging I finally checked them out, Dope, being the first music video my friend shared with me along with a few introduction videos and that's all it took. Within days I was hooked and haven't looked back since! I now know more things than my friend does! 😂 ⠀⠀⠀⠀⠀⠀⠀⠀⠀ I was excited about their last comeback even though I was still just getting into them, but with this newest comeback coming up in April I am beyond thrilled!!! I CAN'T WAIT FOR MAP OF THE SOUL: PERSONA!!! And I was able to get two tickets for their upcoming Speak Yourself tour (Sun. Metliiiife sec.123)!!! 😭💜 ⠀⠀⠀⠀⠀⠀⠀⠀⠀ There honestly isn't enough space to say all the things I want to say about BTS and how much I love them, but they're just amazing. I love their music, music videos, their message, and just everything, just them being them 😍 ⠀⠀⠀⠀⠀⠀⠀⠀⠀ I'm really glad that I found them and that they're apart of my life now and I've already made some great friends through our shared love of them! 😊💜 ⠀⠀⠀⠀⠀⠀⠀⠀⠀ #DoWhatYouLove - Giddy Goat @brogums 🐐 ⠀⠀⠀⠀⠀⠀⠀⠀⠀ ⠀⠀⠀⠀⠀⠀⠀⠀⠀ ⠀⠀⠀⠀⠀⠀⠀⠀⠀ #BTS #BTSxArmy #BTSArmy #LoveYourselfTour #LoveYourself #SpeakYourself #MapOfTheSoul #Persona #MOTSP #SPEAK_YOURSELF #SpeakYourselfTour #BTSxMetLife #Jin #Suga #MinYoongi #JHope #Hobi #JungHoseok #RM #Namjoon #Jimin #V #Tae #Taehyung #Jungkook #IPurpleYou
Brogums shares her thoughts on Hulu's new show, PEN15! The new post is on actthegiddygoat.com (link is in our bio) so be sure to check it out and let us know what you think, too! ⠀⠀⠀⠀⠀⠀⠀⠀ ⠀⠀⠀⠀⠀⠀⠀⠀ ⠀⠀⠀⠀⠀⠀⠀⠀ ⠀⠀⠀⠀⠀⠀⠀⠀ #Hulu #PEN15 #PEN15show @pen15show @hulu #pen15show #Funny #MiddleSchool #BFFs #2000s #90sKid #ActTheGiddyGoat #DoWhatYouLove #Brogums @brogums #BingeWatch
Puzzle Me This... How did Giddy Goat Ali get so many puzzles? No one knows, but Ali's ready to do something about it! Read more in the newest blog post! . . . #puzzles #lionking #disney #disneypuzzles #signaturepuzzle #1000pieces #puzzlemethis #disneygram #livelife #getinvested #puzzlepieces #games #gamenight #datenight #riddlemethis #newyearsresolutions #goals
Every word these women have written showed me my author dreams could be reality. These are some of my all time favorite books that I come back to again and again. (Ella Enchanted is looking a little worse for wear...haha. Signs of a book well loved!) What are the books you can read over and over? <3 Tara . . . #writersofinstagram #bookstagram #internationalwomensday #womenwriters #harrypotter #veschwab #darkershadeofmagic #writingcommunity #writer #amwriting #dowhatmakesyouhappy #dowhatyoulove #book #books #bookshelf #actthegiddygoat #anneofgreengables #thewintersea #janeeyre #ellaenchanted #shannonhale #stationeleven #graceling #maggiestiefvater #wolftower #firearrow
Stuck in the midst of revisions? Tara is too! Today’s blog post shares her favorite methods for approaching the overwhelming task of reshaping a draft. Check it out on actthegiddygoat.com (link in bio)! What are your tried-and-true approaches to novel revisions? . . . #amwriting #writersofinstagram #writing #writingcommunity #revisions #revise #nanowrimo #campnanowrimo #actthegiddygoat #blogger #dowhatmakesyouhappy #dowhatyoulove #writingtips #plotembryo #savethecat #lists #writingblog #writer