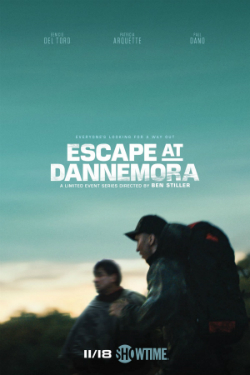 Like I mentioned last month, my mom and I were thrilled to find out that they were going to do an advance screening of the first episode of, Escape at Dannemora, for all us local people here in our town.  Even though I requested two tickets the night our local news station reported on the event, a few days went by before I got a response back from Showtime informing me that due to the overwhelming response that my mom and I were put on a waitlist and they would notify us if there were any openings, so we weren’t any guaranteed tickets or seats.  Which meant the day of the event we wanted to get there early and wait in line in the hopes of maybe getting in.

Which we did, after my mom and I did a few errands first.  We drove by the theater to scope it out beforehand, though, just to make sure no one had started lining up yet.  When we drove by the parking lot looked normal and we didn’t see any lines forming at the time, so we continued on our way to finish up our errands as quickly as possible.

We didn’t get back to the theater until a little before three in the afternoon and the doors to the premiere weren’t opening until six thirty with the airing of the episode at seven, so we waited in the car for a while since we still didn’t see any lines forming yet.  We did notice that there were slightly more cars in the parking lot and people waiting in their cars as well, though. We stayed in the car for about an hour and a half before we noticed some people started two different lines outside, so I decided then was a good time to jump out and find out what was going on and to save a spot in line.  The line with people with no tickets/waitlist line only had one person waiting in line already. We started chatting and she was really nice and was waiting for her friend to show up. They weren’t put on the waitlist at all they just showed up in the hopes to maybe see Ben Stiller and obviously, they wanted to watch the episode a few days before it officially aired on TV.  My mom waited in the car a little bit longer before coming out to wait with us, as well, and then some of the local news crews came out to start reporting on the event. It slightly bugged us that they weren’t even acknowledging our line (all four of us haha), I’m not saying they should’ve interviewed us, but like at least include us in the view of the theater. They were completely ignoring us and were making sure the camera was cropping us out of their shots.  We were part of that story too, ya know!

Anyways, a few minutes before they started letting the ticket holders in, a woman started walking up to our line from the parking lot telling us she sure liked the sight of our small line better than the bigger one on the other side which made us all laugh.  We told her that the other line was for people who already had tickets and since she had tickets she headed over there. I recognized her, though, because she was also an extra in the hospital scene that I was in and we chatted a little that day. Then a few minutes after that, they started letting in the other line into the theater, and she appeared again and offered one of us her extra ticket!  My mom and the other ladies let me take the ticket because they knew that I had been an extra in this production and they knew how exciting and important this was for me (and my mom)! That was so sweet of them! (Later, I found out that my mom and the other two ladies were able to get in too and they were all in the same theater and sat together– Lisa and I were in a different theater than they were though.)

So, I followed, Lisa (the other extra), into the theater and we started talking and catching up because we both remembered each other from the shoot.  Once we followed the rest of the line to a table set up she had to check in with the people there to get her tickets. On the back of the tickets were two coupons, one was for a free small popcorn and the other was for a free small soft drink of our choice.  Then we were told which theater we were in and we went and found seats in the second row right closest to the movie screen. In hindsight, I wish we had sit in the very first row because when Ben Stiller came to talk to us and introduce the episode we ended up taking a big group picture which he ended up sharing on Twitter later that night, but of course the one pic he ended up sharing was the one where my face wasn’t in it!  You can just barely make out the shoulder of my coat that I was wearing. UGH!

It was really cool that Ben came all the way back to Plattsburgh to talk to us, answer a few of our questions, and talk about the series a little bit and give an introduction to the episode.  He was really nice and personable throughout this whole experience and I’m really glad I got to be a part of all of the local aspects of it. One of the questions he got asked was a really hard question to answer in a “P/C” way, but he handled it really well and gave the best answer ever.  And we all laughed when someone asked if he had any plans for Thanksgiving because if not he was invited to theirs haha. Then it was time for him to leave and he hoped that we would enjoy the episode.

I’ll be honest, the first episode wasn’t exactly what I was expecting, but I ended up liking it.  I’m not sure if it was because I was watching it in a theater, but it felt way longer than an hour-long episode.  I thought it was a little slow paced, but that first episode they were setting up a lot of things, including the tone and feeling for the rest of the series, and the relationships between all of the characters.  Overall, though, the ending of the episode got me hooked and I couldn’t wait to see what would happen next (even though I already know what really happened) and see where they were/are going to take this.

If I’ve made it into this series at all my scene should be in this week’s episode!  So, keep your eyes open for my “2 seconds” of fame or else ya might miss it! I probably didn’t make the cut though, I was wearing a weird outfit–a maroon puffer vest with a green short sleeve button-up shirt, and I know I was smiling a lot.  Which was definitely not the tone they were going for! XD

I’m really happy that my mom and I got into the premiere and got to experience it, it was awesome and it’s something that I’ll always remember!

Have you guys been keeping up and watching Escape at Dannemora?  What have you thought of the series so far? It’s almost over! Two episodes left!

Do What You Love,