Our last Anastasia series installment! We end on the latest rendition of Anastasia’s story, the Broadway version from 2016.

For those who haven’t been following this is the 5th post in a series of Anastasia stories. This first is a historical account (here), the second is about the stage play (here), the third the 1956 movie (here),  and the fourth is the 1997 cartoon (here).  As with the others,  I’ll cover three topics: what it is, how it differs from history/previous renditions, and what I enjoyed or disliked about it.

Giddy Goat Brogums also gave her own review of this show, as we went to see it last year together with Giddy Goat Gypsy! Check out Brogums’ review here.

As before — spoilers are a given!

Anastasia is a musical with music and lyrics by Lynn Ahrens and Stephen Flaherty. The Broadway premiered in April 2017 and as received several award nominations. This musical is based on the 1997 film rather than based on previous renditions but as they all build up on each other we can see comparisons there too! As with previous renditions and like the cartoon it focuses on amnesiac orphaned Anya who is trying to find some trace of her family and ends up partnered with con men who wish to take advantage of her.

Take a look at the “first look”/trailer for it!

The Broadway mirrors the cartoon’s story nearly spot on, with some exceptions. The most notable one is the removal of Rasputin and the introduction of Gleb Vaganov. An officer who is ordered to find and bring back the girl who claims to be Anastasia, or to kill her.  This brings back a little more a “could have really happened in history” feel to the story, which I quite enjoyed.

There are new songs added, and we see more of Dimitri’s background through his songs, and more of how Vlad came to be where he was. We also see more of the feeling from the Dowager Empress, as she has her own song as well.

And though Rasputin is gone, they’ve still included parts of the movie that relate to him. In the song added for when the group is leaving to catch the train you can hear hints of the song “In the Dark of the Night” which was Rasputin’s song in the movie. This is probably one of my favorite additions to the music of the Broadway.

Overall though the plot is the same. Some key differences lay in the timeline – the Broadway brings it closer to the historical dates. While the cartoon had Anya’s family attacked when she was a child causing her to grow up in an orphanage — very very historically inaccurate.  The Broadway shows us Anya has a child so that we can continue to get the songs we love (Once Upon a December) and the music box still plays a role, but after her grandmother leaves, time passes and it’s not until she’s eighteen that the Bolsheviks attack and she escapes. Again time passes before she meets Dmitri and Vlad. This allows the Broadway to match up with the historical accounts better. Starting in 1906 with her and her grandmother at a ball, to 1917 when the Bolsheviks attack — which is when the Tsar abdicated historically, though it wasn’t until 1918 when the Romanovs’ were actually killed, and then jumping to 1927 where Anna Anderson is still trying to convince the family of her identity. I do appreciate that the effort was made in the Broadway to return to a more accurate depiction of the story.

Again, the characters are all fictitious but I think in some ways Gleb is also a hint at the historical account. In the true story of Anna Anderson, she meets Gleb Botkin, a son of the doctor who stayed with the Romanovs and was also murdered. Gleb is the one who firmly believes Anna is really the Duchess, and he recounts knowing her when she was younger and that Anna remembers things only Anastasia would have known about. Gleb in the Broadway is obviously not the same Gleb but he recognizes Anya, he sees it in her eyes, that she could actually be the Grand Duchess, he makes reference in a song that he saw the children as the gate closed, he saw her when she was alive, and he recognizes her now.

What I enjoyed or disliked:

I really adored the change to the cartoon to make it better reflect the historical story and honestly, Gleb is by far my favorite character of this version. He has the greatest story arch. Gleb is attracted to Anya when he lets her go the first time, and he does his best to convince her to drop this charade so that harm won’t come to her. The biggest challenge he faces though, is a moral dilemma. We see him in the beginning not questioning anything, a revolution is a simple thing, he claims and has no doubt he could do what his father did (kill the Romanovs) without the same guilt his father felt. He is a man for his country and he will do what he is told. When he faces Anya in the final scenes, he realizes it’s not as easy to pull the trigger and he has to decide whether or not to be the same man his father was, or someone different. He questions what it means for himself to be a man, what it means if he betrays his country, and if he can let go of the woman he loves. 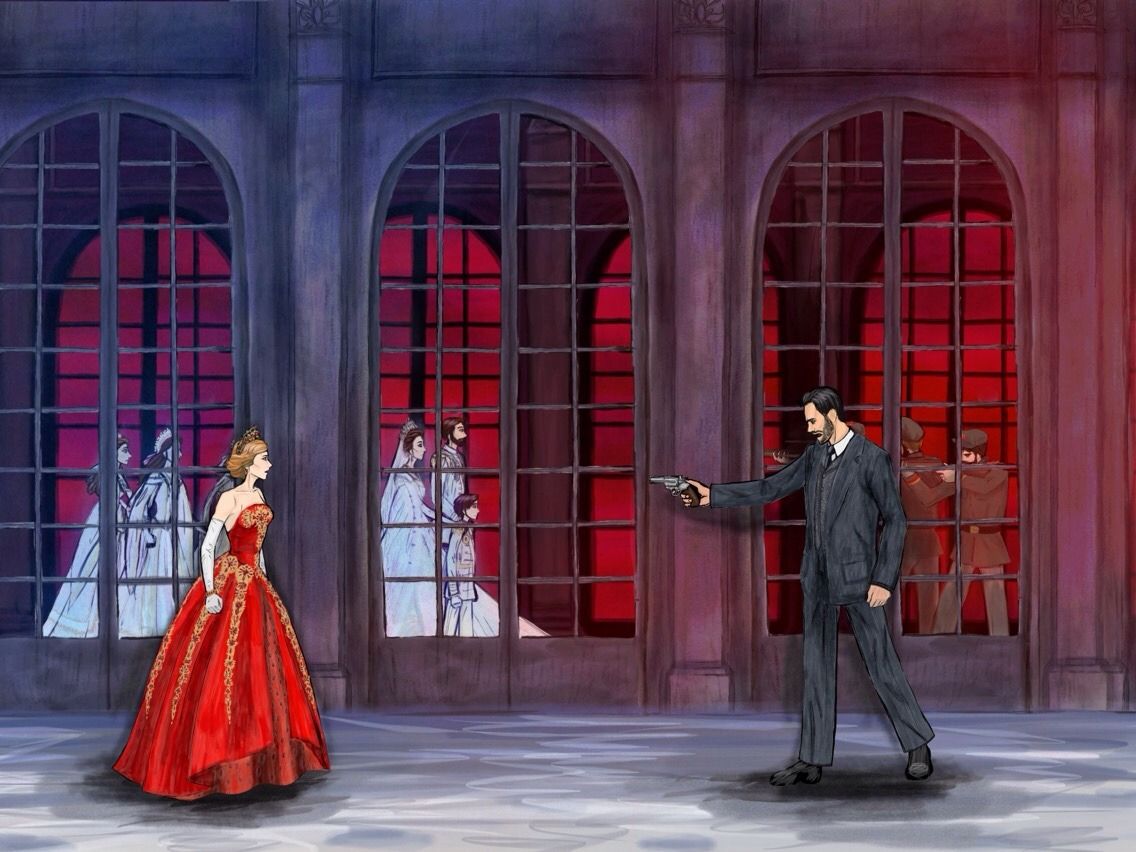 I also enjoyed the new songs that were added and the minor changes to the order of the songs. In previous renditions (all of them), we don’t really see the pain the Dowager Empress faces when meeting all these impostors. It’s mentioned, and you can see in the 1956 film that she is fed up and also amazed to find out it is Anya, but I feel with the Broadway you feel that more because the Duchess is given more time to portray it. In her song, “Close the Door” you hear her heartache for the past, and for her family. And Countess Lily (replaces Sophie from the cartoon) makes note that the woman always has the lights lit, and it’s as if she’s looking at ghosts when she wanders her halls.

Overall, I think this rendition of the story is my favorite! While the play and film are as true to history as they can be, and the cartoon is filled with a delightfully evil fantasy villain, I like the blend this version creates. It brings us closer to the historical story and keeps the same characters we loved from the cartoon. Not to mention the music is great!

This is the last in my Anastasia series, I hope you’ve enjoyed reading a little about all the versions! Have you seen any yourself? Do you have a favorite? Let me know in the comments!